Nested Bean is a company founded in 2011 when the founder, Manasi Gangan noticed a gap in the market for addressing the needs of babies and very young children while they slept.

Manasi understood the importance of making a baby feel safe and secure whilst they slept, and that the best way to do this was to feel the touch of their caregiver.

Nested Bean was Manasi’s solution as she aimed to mimic the feel of a caregiver comforting a baby in a wearable garment, letting the baby sleep, and in turn, allowing the caregiver adequate rest.

One of Nested Bean’s most popular products is its Zen Sleep Sack. Keep on reading to find out more about it. 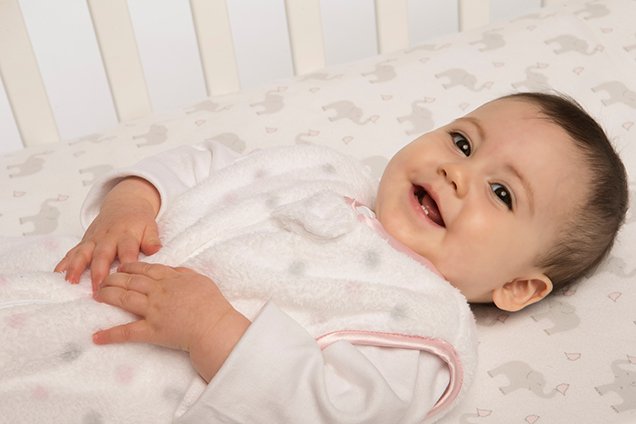 What is the nested bean sleep sack?

The Nested Bean Sleep Sack is a sleep sack that has been designed with your baby in mind to get them off to sleep safely and securely, mimicking your touch.

It is designed specifically for babies who struggle to get to sleep without the loving touch of a parent or guardian and can roll over independently without the help of a parent.

All parents will know what we mean when we talk about our babies’ eyes opening wide as soon as we move our hand from their body!

It can be exhausting trying to get them to sleep knowing that the second you move away from them they will start to cry. That is where the nested sleep sack comes in.

A sleep sack is a wearable blanket that you can put on your baby to help them fall asleep naturally.

The magic touch is that it features non-toxic poly beads in the sack, which mimic the touch of your hand for the baby, reassuring them and making them feel safe and secure.

It comes in sizes starting at 3-6 months and ending at 24 months. The poly beads give weight to the blanket (think of it like the weighted blankets we adults can purchase for comfort) and that weight is focused on one section of the blanket in an oval shape for babies under 12 months.

This is called the pressure pad. This weighted oval shape rests on the baby’s chest, safely and effectively.

If your baby prefers sleeping on their tummy then you can put the sack on the other way around so that the pressure pad is focused on the back.

However, this should only be done if your baby can roll over totally independently.

For ages 12 months and over, the sleep sacks feature a bigger pressure pad where the weight is more evenly distributed across the chest or back.

The specific model is called the Zen Sleep Sack, and it comes in three different versions. These are Classic, Winter, and Premier.

All three of them feature different levels of thermal insulation (also known as ‘tog’). Tog is rated by numbers, and the higher the number rating of the tog, the warmer the sleep sack will be.

Currently, the Winter version of the sleep sack has the highest tog, coming in at 2.5. The Premier and Classic versions are 0.3 and 0.5, respectively.

The Premier version is set apart from the other two versions as it is made from a mixture of cotton and bamboo.

The reason for this is because bamboo is moisture-wicking, making it the ideal choice for warmer climates where the baby is likely to get warmer at night. It is also anti-microbial and promotes coolness due to the lightweight material.

The Zen Sleep Sack can be worn over your baby’s nighttime clothing with ease, and without adding any extra warmth than is needed.

However, you should never use the sleep sack over weighted pajamas as this would be too much weight for your baby to bear.

To get the sleep sack on your baby there are snaps at the shoulder with two options to make them looser or tighter.

The sack also features a zip that runs two ways starting at one armpit and following the whole of the outside seam to the bottom corner of the opposite leg.

This makes those nighttime changes and feeds easier! The material is soft and comfortable for your baby, contributing to a restful sleep.

You will also be pleased to know that the sacks come in a variety of different patterns and designs to suit everyone’s preferences.

For babies who do not like being swaddled and can roll over and back again independently, the Zen Sleep Sack by Nested Bean is an effective method for gently easing babies into sleep.

It must be noted that the Zen Sleep Sack alone may not be enough to fix your baby’s sleeping problems, and that, in order to be most effective, it should be used in conjunction with other methods such as creating a relaxing environment and getting them into a good bedtime routine.

As well as helping sleep, the Nested Bean Zen Sleep Sack can also help to ensure your child feels secure, safe, and that their socio-emotional wellbeing needs are met even whilst they sleep.

How fast does it work?

Nested Bean claims that the sleep sack works within 1-3 nights. That being said, this wholly depends on your baby, and the sleep habits they already have.

By this we mean, when used in conjunction with a good sleep routine and schedule, you are likely to find success much faster.

However, if your baby is not in a good bedtime routine yet, then they may still struggle for a little while. Our recommendation would be to try out the Nested Bean Zen Sleep Sack, but also use it alongside a good routine for your baby.

If you do not already have one, it would be a good idea to consider a sleep training program. Our Sleep Sense Program review details the benefits of sleep training for mom's, baby's and the whole family.

Keep in mind that some babies, like some adults, just find it easier to sleep than others, and 1 to 3 nights may not be the case for you!

The Nested Bean Zen Sack has been tested rigorously for safety and complies with safety regulations in all the countries that sell it.

It has been tested at multiple stages of its design by laboratories that are all accredited by the Consumer Product Safety Commission.

The testing completed is both mandatory and voluntary, and is done over 8 times in the process of making the sleep sacks.

The CPSIA has declared that Zen Sleep Sacks have ‘exceeding regulatory measures’. As well as this, the sacks were inspected by leading pediatric pulmonologists to test for breathing safety.

The sacks all feature weighted pressure pads. For babies 12 months and under, this pressure pad is located on the chest in a small oval section.

For older babies who are over 12 months, it is a bigger area. It is on the chest for all the sleep sacks, but they can also be worn safely on the back provided the baby can roll over and back independently.

As well as their popular Zen Sleep Sack, Nested Bean also creates a number of other useful products designed with your baby’s sleep habits in mind.

They are perhaps best known for their swaddles, of which they have several.

The Zen PJs come in either a footy suit or a sleep bodysuit and they are targeted towards babies who like to have their legs free and do not like being restricted in any way by a swaddle.

All of the items are designed with the same goal - to help babies sleep better based on their needs at the given ages.

All of them are perfectly calibrated with your baby and tested by a range of trusted professionals who specialize in the health of babies and their breathing and sleeping needs.

This means that you can rest assured that whatever product you buy from Nested Bean will be of high quality and will be effective in helping your baby to sleep better.

All in all, we think that the Nested Bean Zen Sleep Sack is a promising product that, in our experience, has been effective in helping babies sleep.

It should always be used in conjunction with other tried and trusted sleeping methods such as sticking to a good bedtime routine and creating a relaxing environment.

You cannot expect the Sleep Sack to work miracles on its own if you are unprepared to put these other methods in place in conjunction with it.

Provided your baby can turn themselves over and back again safely, doing so independently, you will likely find the Nested Bean Sack a great addition to your existing sleep routine.

As an Amazon Associate we earn from qualifying purchases at no additional cost to you.