Cloth diapers are great for the environment, and many parents like the idea of them in theory. However, actually using them can be quite the learning curve when you’ve been so used to disposable diapers for many years.

When your baby uses their cloth diaper to relieve themselves, the next step is not as simple as throwing the diaper in the laundry machine and hoping for the best.

You don’t magically pull out a sparkling clean cloth diaper without putting some pretty harrowing work in beforehand. 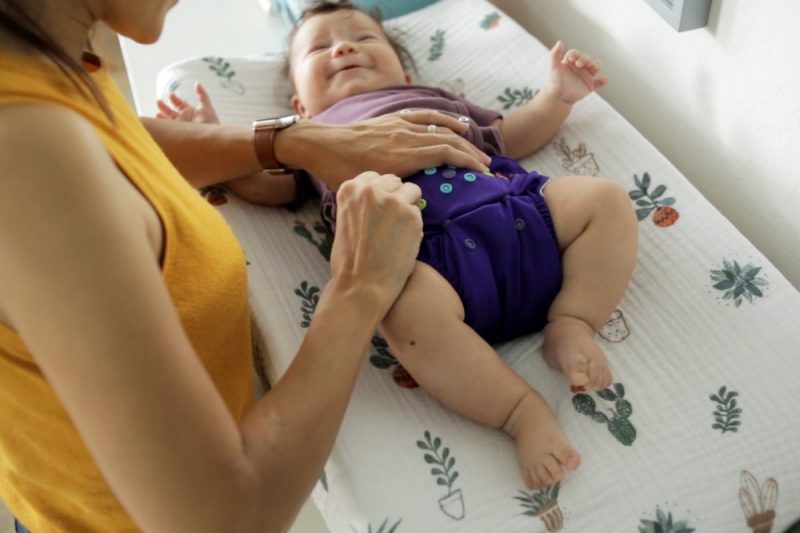 The purpose of our article is to not scare you away from cloth diapers forever, in fact, it’s the complete opposite.

With the current state of the world, we gladly encourage anyone with a newborn to turn away from disposable diapers and opt for reusable cloth ones.

However, many parents don’t look for handy tips and tricks to make the process of cleaning cloth diapers with poop easier on themselves, and consequently, they don’t stick with reusable diapers for very long.

The purpose of this article is to help you understand the best way to clean cloth diapers so that you can stick with them and never look back to single-use alternatives. So, let’s get right into it, shall we?

What your baby consumes will determine how you need to clean your cloth diapers. When your baby is only consuming breast milk, their poops will be completely water-soluble and therefore will come right out of the diapers with a simple machine wash. That’s great news for parents of newborns!

However, once your baby starts to age and becomes ready to begin eating solid foods it’s time to get down to business. Gone are the days of laundry machines being your best friend - you have work to do.

It’s not as difficult or unnerving as it may seem, but you will have to remove the semi-solid poops before putting the cloth diaper in the washing machine. No one said being an environmentally conscious parent was easy!

Luckily, there are three main ways to do this without having to come into close contact with the poop. We’ll take a look at these options below so that you can pick the best one for you and your family.

Use liners to ease the load

Liners are thin pieces of material that sit within the cloth diaper that can be removed once it’s been soiled. Liners can be good for people who get a little queasy when it comes to removing poop from fabric diapers. These liners can either be reusable or disposable, each of which has its own benefits and drawbacks.

Liners that are designed to be reused are often made of fleece or cotton material that can be washed along with the rest of your laundry. Liners are thinner in width and smaller than cloth diapers, making removing the poop much easier than if it were to be stuck to the cloth diaper itself.

Premade reusable liners are not yet widely available on the market, which is why many parents have taken to making their own reusable diaper liners. Simply take some soft material suitable for sensitive skin and cut strips that will fit within the diaper - simple!

Disposable liners eliminate the issue of you having to deal with soiled cotton altogether. They’re often made of a mesh material that can be thrown in the trash and forgotten about. If you don’t want to introduce poop to your laundry machine, disposable liners could be a great option for you.

Having said that, you’ll need to factor in the cost of disposable liners as opposed to reusable ones.

Disposable liners are often biodegradable so you don’t have to worry about the waste you’ll be making, and you’ll still be wasting less than if you were to use disposable diapers so don’t worry about that too much.

Suck it up and scrape

Alternatively, if you didn’t want to use liners or didn’t get along with them, you’d have to remove the poop another way. Scraping the poop into a toilet bowl is one way to do it, and some parents prefer just to get on with it and get the task out of the way.

Once you’ve scraped the soiled diaper a few times, you’ll start to become used to the action and not care as much. For now; however, we’d understand if you were grimacing at your computer screen right now.

A rubber scraper will aid you with solid poops, but it might make more of a mess with the semi-solid matter.

Water is your best friend

If your baby is known for loose stools, water might be the best option for you to go with because it loosens the poop from the fabric and makes it easier to remove.

Some parents use a bucket of water to soak the diaper in to clean it. Doing so ensures that you don’t have to touch the poop and it should just fall off into the water.

You can then pour the water down the toilet and flush the poop far away from you. However, the issue with this is that you’ll be left with a soaking wet diaper that needs to be wrung out before being transported to the laundry room.

This will require your hands grabbing and twisting the soiled fabric, which might not be your ideal situation to put yourself in.

Alternatively, water pressure sprayers can target the water in one area which can prevent you from having to remove the water from the cloth.

The pressure of the water will remove the poop and flush it right into the toilet so that you don’t have to do anything else. Once you’re done, feel free to put the diaper in the laundry machine straight away.

The only issue with water pressure sprayers is that they can often cost more than you might be willing to pay. You’ll need to determine whether the cost outweighs the ease of use.

View all posts by Brandon Skene