So you’ve made it to the terrible twos. Don’t worry it’s not all bad.

When your baby becomes a toddler you can look forward to fewer poops and hopefully, more independent toileting! Yay!

If you’ve got friends with toddlers as well you’ve probably had plenty of updates about new words, new skills, and funny stories.

What you may not have talked about is how often your toddler poops. I mean, it’s hardly dinner talk! 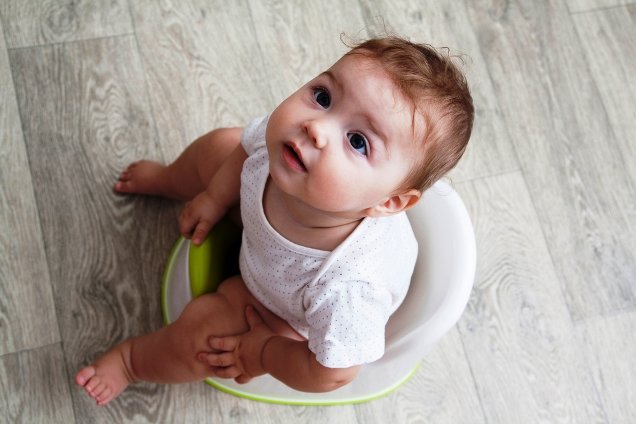 It is important to know how often and what sort of stools your toddler should be passing.

Poop, gross as it is, is an important indicator of any potential health issues.

So, and here’s a sentence I never thought I’d be writing, let’s dive into toddler poops!

There isn’t a hard or fast rule on how often your toddler should go for a number 2. Each child is different so really as long as it’s normal for them then you’re good.

Some toddlers poop once a day, others once every couple of days. Some toddlers go a few times a day. As I said, there isn’t one right amount. As long as they are happy and healthy in themselves they’re fine.

If you notice a change in frequency in your toddler’s poop you should keep an eye on them. If your toddler is pooping more than normal it might be an indication that something they are eating is too rich for their bellies.

If your toddler is pooping less than three times a week, it could be a sign that they are constipated. Constipation is fairly common in toddlers and children so don’t panic.

Much more important than the frequency is the consistency and color of your toddler’s poop.

We’re going to discuss poops of all colors, shapes, and sizes now. If you have a weak stomach, you might want to stop reading.

Let’s look at color first. Natural earthy colors like browns, yellows, and greens are all normal. This is the same for babies. You’ll no doubt be familiar with the vibrant green of some baby poops. This continues into toddlerhood.

The colors that are a cause for concern are blacks, reds, and white. These can be signs of issues in the bowels.

Red poops are perhaps the most frightening in appearance. We don’t like to see anything that looks like blood coming out of our little ones.

In reality, red poop is usually an indication of a cut in their bottom or lower intestine. This is often caused by hard, constipated stools that tear the anus on their way out. This is not pleasant but it’s not a sign of something terrible in most cases.

Sometimes red poop can be caused by food. Anything with a strong red color will probably create a red poop. This could be beets, sweets, or berries.

Black poop is usually a sign of internal bleeding. The black color comes from the blood which continues to be digested as it moves from the system. If your toddler is having black poops you need to get them seen by a physician as soon as possible.

There is a caveat to this. Some foods and medicines can make your toddler’s poop black. Iron-rich foods can cause black poop, as can things with black colorings like licorice and Oreos.

Medicines like iron supplements and Pepto-Bismol can also give your toddler black poop. Again this is to do with the ingredients. Iron, in general, tends to give everyone black poop, kids and adults included.

White poop is more unusual and a sign of an issue in the liver, gallbladder, or kidneys. White or very pale poop suggests a lack of bile.

Bile is a substance that is produced by the liver and aids digestion. When bile is not being produced properly it could be a sign of underlying illness.

If your toddler has white stools, they should be taken to the doctor as soon as possible.

Healthy poop should be soft but formed. It shouldn’t be runny or hard and dried. I loathe to ruin ice cream but ideally, poop should look and feel like soft-serve ice cream.

Hard, dry, or pellet-like poop is an indication of constipation. This is because the poop dries out the longer it spends in the colon.

Constipation slows down your bowel movement meaning poop tends to turn dry and hard. If it’s there for a real long time, it dries to the point where it becomes hard pellets.

Mushy or runny poop is a sign of diarrhea. You don’t need to rush off to the doctor at the first sign of mushy poop.

You can treat mild diarrhea at home by keeping your toddler hydrated and limiting fruit juice.

You might also want to consider upping their fiber and fat. Fat can be found in milk which should still be a part of your toddler’s diet. Fiber comes from roughage in fruit and veg as well as from cereals.

Constipation is fairly common in toddlers. It does need to be addressed but can usually be treated with advice from your physician.

One thing to note is that your toddler might be constipated and still have runny poops. This is called overflow poop. This runny stuff can get around the backed-up hard poop and exit the rectum. Administering a laxative can cause this scenario, it is important to discuss with your physician a strategy to resolve the cause of the constipation.

Similarly, a few small pellet-like poops can also be considered overflow poops. This is because as the impacted poop stuck in the rectum continues to dry out.

The small pellets break off the bottom and find their way out.

Often, toddlers won’t be aware that they are passing these small pellets because their rectum has stopped sending signals to the brain.

Usually, the rectum tells the brain that it needs to do a poop when it feels poop.

However, in constipated people, the rectum becomes used to the mass and stops telling the brain that they need to go to the toilet.

You don’t need to inspect every bowel motion your toddler has.

If you’re potty training you tend to get a good idea of what’s happening with their poop anyway.

Generally, toddlers will let you know if they’re finding it hard to poop or if it hurts to poop.

If this is the case, assess the next few poops and decide whether you need to see your doctor.

View all posts by Ashleigh Thomas